Today's the day. I'm actually feeling really calm. I'm not due in until 11am as the nurse called yesterday to let me know I could come an hour later as I was on the afternoon surgery list.

We head to the hospital, with my bag packed with everything on my mastectomy bag checklist and this time I head to a general surgery waiting room. I check in but I'm told Chris cant stay with me - the waiting room is for patients only. Why? I start to feel anxious even though I've been ok all morning.

Chris sits down with me while I sort my things out.

The nurse calls me through just to measure my calves ready for my sexy DVT tights. I'm handed the tights and sent back to Chris in the waiting area.

We take a few minutes and then say our goodbyes with a huge cuddle and a kiss. It's so scary being left on your own. I hate it.

Another nurse calls and we head off down a different corridor. First she goes through my details; name and date of birth first and then on with the ID bracelets -both wrists! Next, I'm asked what operation I'm having, I reply right prophylactic mastectomy but explain I still need to talk to my consultant about my nipple options. She used to work with my consultant and puts me at ease about all of the different routes I can take, she even shares anecdotes of her time with Mr M, my doctor. We laugh - a lot. Back to the tick boxes though...Allergies? Metal work? All my own teeth? The nurse is so lovely and we end up chatting and giggling for so long that another nurse knocks on the door to see whats taking so long. The phlebotomist and the anaesthetist have both been calling my name. She wraps it up and takes me to get my bloods done. I do wonder why they are needed again when I have already had blood taken during my pre-op a couple of weeks ago.

This time it's the anaesthetist .  She checks my ID bands and goes through the same questions as the nurse as well as asking if Ive ever had any reaction to anaesthetic before. I haven't but I get a flash back to the poor lady that I heard during my last operation. The anaesthetist tells me Im first on the list so should be going down to theatre at 1pm. Not too long to wait, thank goodness. As she wraps up I can here my consultant Mr M outside. As she leaves he comes in.

He greets me and tells me I'm his only surgical patient today so as soon as theatre opens again after lunch I'll be called. First, I have a few questions about my nipple. I lost my left nipple during my wide local incision. For the prophylactic surgery I was given a number of options for my nipple:

Mr M had said that I could just let him know on the day which option I would take.

In all honesty, I had been certain that I'd just lose the right nipple too however this week Chris and I had a big heart to heart about how I feel about bad boob and how I want to feel and look as 'normal' as I can. It's just the risk of keeping even a small bit of breast tissue that is playing on my mind. If they find anything untoward at all in the right breast then I'd rather lose the nipple but if its clear then I'd like to share it. I'm also worried that the nipple might die after the op due to lack of blood supply but Mr M explains that he's never had an unsuccessful share.

It's time to make the final decision. "I'd like to keep the nipple and then share it."

Mr M explains that this means he can likely go straight to implant and i'll avoid the bulky heavy expander that I have on the left. I take my top half of clothing off and he marks me up ready with a big black marker. The line goes around my nipple and off to the side across my breast. A different scar to last time.

He leaves  and I go back to the waiting room. I really wish I'd have had Chris in thier with me to ask more questions. I immediately panic that I've made the wrong decision and head out to the corridor to call Chris. I'm in floods of tears. I feel like I'm now tempting fate for the sake of vanity. He calms me down. I hate this. I need him here. We say goodbye again, my brain is fried, and I head back to the waiting room to wait. After 20 minutes.... 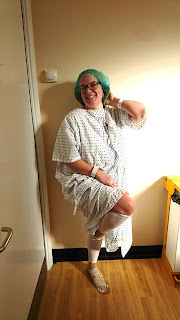 The friendly nurse calls me through. It's time for me to don my gown and my sexy DVT socks. She insists we take a photo to document my sexiness. We giggle a lot as I pose for the camera!

Before I know it I'm walking down to theatre. This time there is no pre theatre anaesthetic area so I head straight in to the theatre and lie on the operating table. The cannular goes in easily this time around and I'm given oxygen to breathe. I don't even make the countdown. I'm out.

Two hours later I come around in the recovery room. I'm sore and I groan as I regain consciousness. I ask for something to ease the pain and I'm injected in to the cannular. I fall back asleep.

When I wake up again, they call the porter. I'm ready to be taken to the ward. Last time there were no beds soI had been gifted an ensuite room in the private part of the hospital - no such luck this time.

There are two other ladies already on the general surgery ward and they stare as Im wheeled in. The pain has resumed and I hate the fact that I have company. The nurse comes in to check my obs and I ask her to pass me my phone so I can call Chris and message my Mum.

Both are pleased to hear from me and Chris says he's going to come straight in. I give a a list of things I want - Lucozade Orange, chocolate and grapes. He delivers!

At 7.30pm we say goodbye for the night. I know it's going to be a long one as I'm on 2 hour observation. I get woken through the night and have to keep asking for more painkillers. I'm given oramorph again so soon im vomiting despite the anti sickness tablets.

Despite hardly any sleep the light comes on to wake us just after at 6.30am - what the actual hell - it's Saturday for Gods sake! I close my eyes and go back to sleep.

A general surgeon visits at about 9.30am and asks how I am. He says i'll be able to go home around lunch time. My consultant isn't here because its the weekend. I ask if the op went welland for confirmation as to whether I now have an implant oran expander. The doc seems confused and has to thoroughly read through all of the notes to confirm I have an implant. I'll be sent home with codeine, paracetamol and a course of antibiotics. As soon as the pharmacy send them up I'll be able to go.

It feels strange this time around. I don't know if it's because it's now the weekend or because I've chosen to have this operation rather than it being a necessity but I feel Im just not being looked after the same. There's no physio to see how I'm doing, tell me what exercises to do. There's no support session like before. When the breast nurse arrives she tells be I wont be given a specialist bra like last time because they are just for cancer patients. It makes me feel a bit down and I just want to go home to the children.

Finally Chris arrives at the same time as my meds. I grab my pillow, Chris grabs the bags and we head home. I feel a sense of relief that I got what I wanted. It's over. I can start to move on.